After I’d done my piano song posts, I began to think of other musical instruments that appear in the picturisation of songs. Songs where it’s not an orchestra (Ted Lyons and His Cubs, anyone? Or The Monkees?), but a hero or heroine, not a professional musician, being the one ‘playing’ an instrument? Guitars, I thought, would be a good place to start. A ‘guitar songs’ post. I tried by listing, off the cuff, all the songs I could remember as having a guitar-playing actor or actress. Then I went and checked on Youtube—and discovered that several of the songs I’d remembered as featuring a guitar actually featured a different string instrument: a mandolin, for example (in Tum bin jaaoon kahaan), or some even more unusual and exotic instruments. 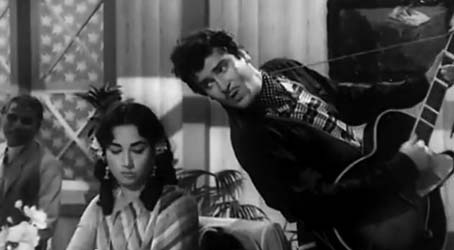