Born in Jalalpur Jattan (Gujrat District, Punjab Province, in present-day Pakistan), Rajendra Krishan is believed to have been very interested in literature since an early age. As a young man, Krishan moved to Shimla (where his elder brother was already living) and began work as a clerk. This didn’t last long, and he eventually moved to Bombay and the film industry—after, supposedly, eking out a living by selling handkerchiefs and socks on the pavement. Krishan’s first film was as a screen writer—he wrote the screenplay for Jannat (1947)—but as a lyricist, his first hit song was Chup-chup khade ho zaroor koi baat hai (Badi Bahen, 1949). In the nearly four decades that followed, Rajendra Krishan wrote hundreds of songs, won the Filmfare Award for Best Song (for Tumhi mere mandir tumhi meri pooja from Khandaan, 1965) and wrote dialogue and/or screenplays for dozens of films.

Choosing ten favourites from such a formidable corpus was a difficult task, but here it is: my ten favourite Rajendra Krishan songs. As always, these are all from pre-70s Hindi films that I’ve seen, and are in no particular order. The English transliterations and translations of these songs are available here.

1. Yoon hasraton ke daag (Adalat, 1958): Adalat may not have been a brilliant film, but it did have some superb music—from the lyrical and romantic Zameen se humein aasmaan par, to this heartbreaking song of blighted dreams. Nargis’s character, her life destroyed by the greed and lust of one man and the prejudiced suspicions of the man she loves, laments her life. The words are not a plea for help—there is no-one to turn to, no-one to offer sympathy—but a sad and simple account of sorrow: the ‘Gham raah mein khade thhe, wohi saath ho liye’ (‘Sorrows stood in the way, and they became my companions’) is so heart-wrenching a line. Interestingly, in the last verse, Rajendra Krishan brings in a reference to another song of Adalat: Unko yeh shikaayat hai ke hum kuchh nahin kehte is mirrored in that bit about the world begging her to speak when she would much rather stay silent.

2. Main teri nazar ka suroor hoon (Jahanara, 1964): Jahanara had some lovely ghazals, a stunning score that often gets remarked upon more for the excellence of Madan Mohan’s music than for the beauty of Rajendra Krishan’s lyrics. But beautiful they certainly are, as can be seen in this aching love song sung to a lover from whom one has been separated forever. Bharat Bhushan’s character, a commoner, has made the mistake of falling in love with a Mughal princess—and both he and his beloved, Jahanara, know that nothing can possibly come of this ill-fated romance, because Mughal princesses are not allowed to marry. They spend years far apart, but their love does not wane. This song, though wavering between despair and hope (can she have forgotten him? Can the separation mean a final break, even as far as memories go?), finally ends with a confident (though still dignified, still poignant) assertion: yes, he is always in her heart.

3. Itna na mujhse tu pyaar badhaa (Chhaaya, 1961): When it came to Chhaaya, I was torn between two songs, Aansoo samajhke and this one—and even Itna na mujhse tu pyaar badhaa occurs in two versions, one a duet and the other a male solo. Finally, I settled for Itna na mujhse tu pyaar badhaa in its duet form: a beautiful example of a love song that is not a promise of roses all the way. Though he loves her, he fears their love will never be—the gap between them is too wide—and resists, trying to dissuade her by saying that love is not for him; he’s a wayward cloud, here today, gone tomorrow. But she counters that, again and again, telling him that if he is a cloud, she is water, inseparable from the cloud. And that come what may, she will always be with him. Sweet, and beautifully rendered as well.

4. Meri pyaari Bindu (Padosan, 1968): And, for a change, a song that’s very different, and which I included primarily to illustrate Rajendra Krishan’s versatility. Of course, the sheer funniness of Meri pyaari Bindu depends upon a lot of factors, Kishore Kumar’s rendition and acting being prime among them; but the lyrics of this nutty song deserve a mention too.

Here, Bhola (Sunil Dutt) and his solicitous friends—especially his ustaad (Kishore Kumar) imagine the day Bhola will finally be accepted by his lady love, Bindu, as her sweetheart. What Bindu will say, what praise she will lavish on him. And then, naturally, how Bhola will respond. Ustaad enacts it all, sings it all, down to that hilarious bit about his love being a naiyya, a boat: ‘beech bhanwar mein gud-gud gote khaaye’. That never fails to crack me up, the imagery is so funny. In fact, this entire romantic exchange, chockfull as it is of mostly stock metaphors (but all couched in everyday, most un-poetic language), actually becomes something pretty unromantic. Unromantic, but humorous. 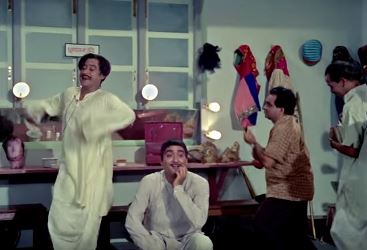 5. Chal ud jaa re panchhi (Bhabhi, 1957): Bhabhi was a pretty formulaic family drama, chock-full of misunderstandings, long-suffering and self-sacrificing relatives, easily manipulated other relatives, evil and greedy villains, and tonnes of melodrama. What redeemed this film was its songs, especially this one song. Chal ud jaa re panchhi appears in several instances during the course of the film, invariably accompanying the departure of some character. While the music and Rafi’s rendition are excellent, one must give due credit to Rajendra Krishan’s lyrics as well. Here is a sad and simple song of farewell, wishing a departing friend and lover goodbye, consoling them for the sorrow they take with them, comforting them for the dashed dreams that lie behind. A bird must fly away, leaving behind its home: a good metaphor for the blighted souls in Bhabhi who keep travelling hither and thither, pushed about by fate. 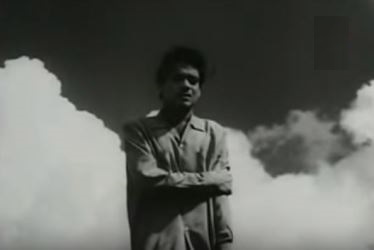 6. Yeh raaste hain pyaar ke (Yeh Raaste Hain Pyaar Ke, 1963): If Rajendra Krishan could write the classically romantic songs of Jahanara, or the beautiful Kaun aaya mere mann ke dwaare, he was also capable of writing a bitterly cynical song warning against love. In the title song of Yeh Raasta Hain Pyaar Ke, Asha Bhonsle sings playback for Shashikala’s character, a woman who has realized that her lover has wandered: he is having an affair with another, a married woman, no less. Even as she watches them together at a poolside party, she sings a song against love: an emotion that leaves one scarred and battered, an emotion that wrecks one’s life, forever and ever. There is no hope here, no desire for revenge and no heaping of anger on the faithless one: just a bitter lament against love. 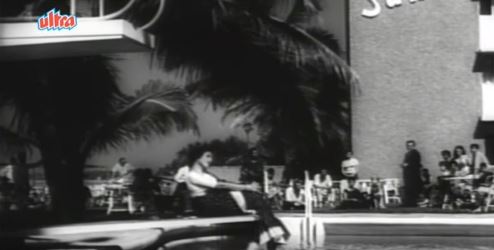 7. Yeh hawa yeh raat yeh chaandni (Sangdil, 1952): A far cry—at least as far as lyrics are concerned—from the previous song is this one (ironically enough, the lyrics and the situation are in fact very deceptive: Dilip Kumar’s character in Sangdil is not in love with Shammi’s character, and knows very well that her pursuit of him is all a sham: she only wants his wealth). But when it comes to being a classic love song, this one ticks all the boxes. For one adaa of hers, he will give up all that is beautiful: this night, this breeze, this moonlight. For she is the most beautiful in all creation, her very eyes brim with the wine that makes flower buds so enticing. And who is to blame him for his quest of her? This mission, to be hers, is itself sheer joy. 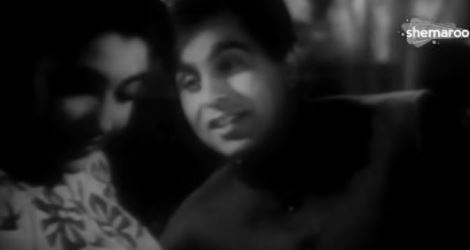 8. Yeh raah badi mushkil hai (Gateway of India, 1957): Gateway of India had some good songs, with Do ghadi woh jo paas aa baithe and Na hanso humpe zamaane ke hain thukraaye hue probably beating all the others when it came to popularity—which is sad, because at least one of the other songs is notable more for its lyrics than for its music. Madan Mohan’s music for the club song Yeh raah badi mushkil hai is good, but what sets this song apart are the very pointed words of Rajendra Krishan’s lyrics. Anita Guha, dancing while Chic Chocolate and his band play in the background, warns Madhubala’s character not to fall prey to the charming young man who’s trying to woo her. The metaphor in the second verse is especially good: the gleaming sand, the attractiveness of which suggests water, enticing the thirsty… stay away, stay away. These are flames; do not try to quench your thirst here. Brilliant imagery. 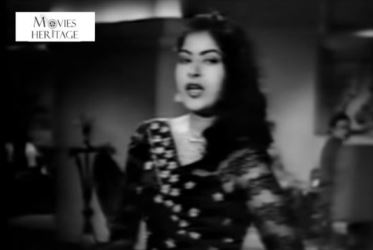 9. Khush raho ahl-e-chaman (Main Chup Rahoongi, 1962): Main Chup Rahoongi allowed Rajendra Krishan to write songs of very varying tones, from the devotional Tumhi ho maata pita tumhi ho to the extremely romantic Koi bata de dil hai jahaan. And it had this one, one of my favourite songs of farewell from Hindi cinema. Meena Kumari’s character, leaving home under a cloud—disgraced, believed to be a ‘fallen woman’ (by virtue of being a supposedly unwed mother)—is shown going away, while Rafi’s voice sings of her emotions. Krishan’s lyrics are poignant, full of homesickness, telling those left behind (‘the fellow residents of the garden’) to remain happy and to comfort those who miss the one gone. But through all that comfort offered, one unspoken thought keeps pressing forward: who will comfort the lone traveller, the one who goes God knows where, alone and friendless? 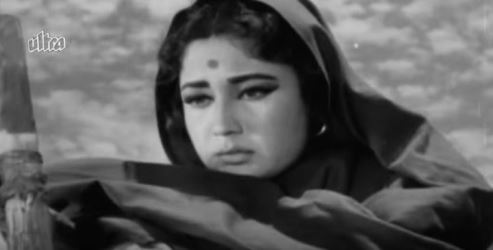 10. Bulbul ke nasheman par (Duniya Jhukti Hai, 1960): For me, the one song from Duniya Jhukti Hai which really stands out (enough for me to have watched the film) is the stunningly romantic Gumsum sa yeh jahaan—but that, I will admit, is more for the music and the rendition, not for the lyrics. The lyrics there are only part of the package, and as far as I’m concerned, are overshadowed by everything else.

Not so in Bulbul ke nasheman par, where, while the music and rendition are good, the lyrics do stand out. A dancing girl sings a song that has a somewhat woeful seductiveness to it: the man she yearns for, whose very existence has wreaked havoc with her life, keeps his distance from her. She fears he will never be hers, but she cannot help but hope, pray. I really like the metaphors Rajendra Krishan uses here: the protecting of one’s garment from the fire; the lightning striking the hapless bulbul’s nest; the hands lifted in prayer to a merciless heaven… beautiful. 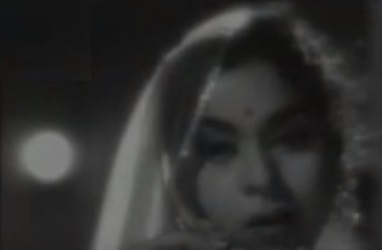 Thank you for your poetry, Rajendra Krishan Sahib. May your words live on.

50 thoughts on “Ten of my favourite Rajendra Krishan songs”