I started off being a diehard fan of Dev Anand’s. While in school and college, pretty much all of Dev Anand’s films I’d seen were the ones Doordarshan aired: CID, Teen Deviyaan, Tere Ghar ke Saamne, Jewel Thief, Nau Do Gyarah, Munimji… what wasn’t to like? Yes, I drew the line at Dev Anand post the early 70s—those mannerisms by then had begun to be tiresome, and the man’s ‘evergreen’ image really didn’t fool me. It was downright embarrassing to watch films like Warrant or Heera Panna.

And then, when I was in my twenties or so, I began paying a little more attention to Dev Anand’s early career—and found that here was a mix of films, some good and some pretty forgettable except for some good music. After trying out films like Vidya and Sazaa, I sort of gave up. Until Sanam was recommended to me by someone who knows his Dev Anand movies inside-out. A comedy, surprisingly modern, I was told.

END_OF_DOCUMENT_TOKEN_TO_BE_REPLACED

This film stars Shammi Kapoor.
If you like Shammi Kapoor, do not watch this film. If you are a glutton for punishment and want to see it anyway, do not watch the last ten minutes. I can guarantee that you’ll be happier for it; you can decide for yourself what you would have liked the end to be, and spare yourself the trauma of sitting through what is definitely the most horrifying end I’ve ever seen in a Hindi film. 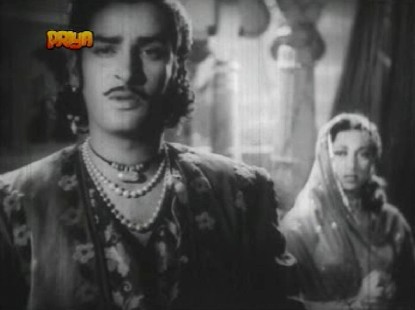