Among the lesser-known films for which my Uncle Vernie played was Shrimatiji, made by (and featuring) some of his closest friends. IS Johar, who was one of Vernie Tau’s chums, wrote, directed, and acted in it. The three music composers for the film (Jimmy, Basant Prakash, and S Mohinder) too were friends of Vernie Tau’s, Jimmy an especially close pal.

My father had recently expressed a desire to watch this film, mainly to hear his elder brother’s music. When I discovered it starred Shyama (whose gorgeous smile and dancing eyes make her one of my favourites), I decided I needed to watch it too. And, since the only other film in which I’ve seen Nasir Khan was Ganga-Jamuna, I wanted to see if he was any different in a much earlier film. 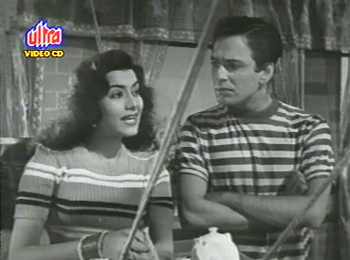