A wealthy young man strikes out on his own to see how the rest of the world lives. He pretends to be poor, goes to live in a community of poor people, and falls in love with a poor girl who doesn’t realise he’s a wealthy man. Starring Dev Anand as the protagonist.
Asli-Naqli? No. Interestingly, not. This was Maya, made just a year before Asli-Naqli, but with a very similar storyline.

END_OF_DOCUMENT_TOKEN_TO_BE_REPLACED

This blog’s been on a Hollywood roll long enough (two films in succession? Too long). So we’re back to good old Bollywood, and with a film that somewhat repeats the cast of the deplorable Bhabhi: Balraj Sahni (again as the long-suffering, self-sacrificing eldest brother), Nanda (again simpering and whimpering), even Shyama, again as the daughter-in-law who starts off being nice but changes into a screechy harridan. And, like Bhabhi, this too is about a loving family split asunder. 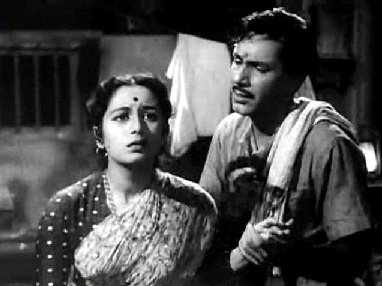