Some months back, I watched two relatively new Muslim socials: Daawat-e-Ishq and Bobby Jasoos. Both were an interesting reflection on the way the Muslim social has changed over the years (after close to disappearing during the 90s). The Muslim social of the 1950s was, more often than not, a film that, even when set amongst the wealthy upper class—the nawabs and their kin—came heavily burdened with all the stereotypical trappings of what was perceived as ‘Muslim’: the qawwalis and mushairas, the shararas and sherwanis. (I’ll write about all of those, and more, in a post to follow).

Bobby Jasoos and Daawat-e-Ishq had shed those to quite an extent. But that process had begun in earlier films, even as far back as the 60s. In Neend Hamaari Khwaab Tumhaare, for example, where Nanda’s character—the daughter of a nawab, no less—doesn’t merely have a Western education, but spends most of her time in skirts and dresses. And this film, where Nutan’s Jameela is a firebrand, giving as good as she gets, and by no means the simpering and demure Muslim girl exemplified by her contemporaries in films like Mere Mehboob, Mere Huzoor, and Chandni Chowk. 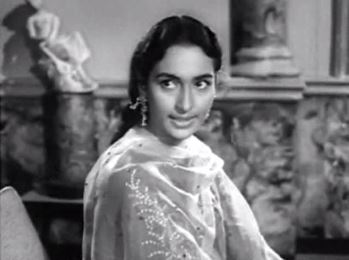 END_OF_DOCUMENT_TOKEN_TO_BE_REPLACED

In one pivotal scene in Jis Desh Mein Ganga Behti Hai, Kammo (Padmini), the daughter of a dacoit chief tells her naïve beloved that they, the dacoits, are not to be scorned or derided, because they wield guns to make things equal between the rich and the poor. They take from the rich and give to the poor, because the poor have always been preyed upon by the rich.

“Kammoji, tum log chochilist ho?” asks Raju (Raj Kapoor), wide-eyed. Because chochilists, as he informs Kammo, also work to make things ‘barobar’ between the rich and the poor. And when he is reassured that yes, that is the philosophy of the dacoits, Raju decides there and then that he will no longer think of dacoits as evil people.

END_OF_DOCUMENT_TOKEN_TO_BE_REPLACED

When I reviewed Les Quatre Cents Coups a couple of weeks back, I was mentally riffling through the list of good films with child protagonists that I’d seen. I couldn’t, sadly, think of many. There were some—The Night of the Hunter, Bhai-Bahen, Bandish, Do Kaliyaan, for instance—in which children played an important part. But these were either not really films about children, or they were films about stylized children: little adults, really, or oversized toddlers.

Then I saw Kaphal – Wild Berries, made by blog reader, fellow blogger and film maker Batul Mukhtiar (aka Banno), and thought: yes, this is what a good film about children should be like. (Here, on my website, is a review of Kaphal). I also remembered, then, that Banno had once recommended a film about children.  The Raj Kapoor production, Boot Polish, which she’d reviewed on her blog, and which I’d never got around to watching. If someone who could make such a lovely film about children could recommend a film, that film would be worth watching.

So here we are. And, thank you, Banno.

END_OF_DOCUMENT_TOKEN_TO_BE_REPLACED

One reason I’m glad I began this blog is that, because of it, I’ve met (although in most cases only in cyberspace) a lot of other people who are as enthusiastic about cinema as I am. Through these friends, I’ve been introduced to ‘new’ old films, to songs and directors and actors and styles of cinema that I hadn’t known before. Occasionally, too, my friends have been able to persuade me to give up a prejudice and watch a film I had no great expectations from. This is one of them.

At least four fellow bloggers/readers/friends – Yves, Bawa, Harvey and Pacifist – had been advising me, for a while now, to watch Teesri Kasam. I was assured that Raj Kapoor wasn’t at all Chaplinesque (something I dread in RK’s films) here, and that the film itself was excellent. I’d been trying to get hold of Teesri Kasam too, but the DVD rental company I subscribe to never seemed to have it in stock. Finally, last Sunday, I watched the film on Youtube. And yes, it is a wonderful film. Sensitive, lyrical, quiet, and easy to like. 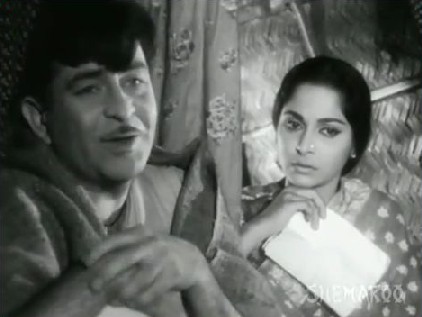 END_OF_DOCUMENT_TOKEN_TO_BE_REPLACED

As I’d mentioned in my last post, I’m not much of a Raj Kapoor fan. I have seen most of his films, but I like very few of them. Jaagte Raho, a flop when it was first released (even though it won an award at Karlovy Vary) is one of the exceptions: an RK film that I found engrossing and worth the watch. Part of it probably is the fact that it features a veritable who’s who of 50’s Hindi cinema character actors. Part of it is due to Salil Choudhary’s superb music. And more than that, it’s because this is a well-scripted story, socially relevant in a tongue-in-cheek way.