Today is the birth centenary of the Indian director, writer and producer Subodh Mukherji. While Mukherji doesn’t have a huge list of films to his name—barely a dozen—the majority of the films he did make proved to be very successful ones, big entertainers that had great music, starred beautiful people, and were generally good time-pass, if nothing else.

Born in Jhansi on April 1, 1921, Subodh Mukherji was jailed for three months in 1942 for his activities as part of the Indian freedom movement. Subsequently, at the behest of his family, he was made to go to Bombay to join his elder brother Sashadhar Mukherji (who had established Filmistan Studios along with Madan Mohan’s father, Rai Bahadur Chunilal; Ashok Kumar; and Gyan Mukherjee). It was for Filmistan that Subodh Mukherji made his first film, writing and directing Paying Guest (1957), though he also took time off in between to direct Munimji (1955). Through the late 50s and the 60s, Mukherji was to go on to write, produce, and/or direct several films that exemplified his philosophy of making films that told entertaining stories: Junglee (1961), Love Marriage (1959), Shagird (1967, starring Sashadhar Mukherji’s son, Joy Mukherji).

END_OF_DOCUMENT_TOKEN_TO_BE_REPLACED

Chanda aur Bijli is one of those films I’ve known about for a long time—because of a family anecdote that is centred around a song from this film. My sister, a toddler when Chanda aur Bijli was released, quickly fell in love with Bijli hoon main toh bijli. Her version of it, though, was somewhat different (and suggests a mind that dwelt rather heavily on food):

For those who don’t understand Hindi, that means:

Lightning; I am lightning,
When I went out after eating a bun,
There was a fish in people’s hearts
That same fish that Baby ate!

The original, of course, is a rather more predictable Hindi film song:

(Lightning; I am lightning,
Every time I went out, tripping along,
I made people’s hearts trip)

END_OF_DOCUMENT_TOKEN_TO_BE_REPLACED

In 1956, Waheeda Rehman made her debut in Hindi cinema in CID, with Dev Anand (Waheeda wasn’t the heroine of CID—Shakila was—but she had a good and somewhat offbeat role as the vamp with a heart of gold). Over the next decade and a half or so, Waheeda and Dev Anand were to go on to act together in several more films, probably their most famous pairing being in the hugely popular Guide (1965).

I have watched, as far as I know, all of the Waheeda-Dev films over the years. The only one that (again, as far as I know) I hadn’t watched yet was this one. Time, I decided, to make amends for that.

As in many other films of his, Dev Anand in Roop ki Rani Choron ka Raja is a crook—a thief, to be precise. We are introduced to Chhagan (Dev) when he’s in a shady-looking dive, buying a bottle of booze. Shortly after, Chhagan is accosted by ‘Langad Deen’, a partly-crippled character (played by Jeevan), who has a bit of news for Chhagan: a steamer is about to begin the journey down the river to the pilgrimage spot of Shivsagar. Langad Deen has it on authority that among the people on board is a wealthy jeweller who is carrying a very valuable diamond to be offered up to the god Shiv at Shivsagar.

END_OF_DOCUMENT_TOKEN_TO_BE_REPLACED

Every now and then, I am reminded of a film which I’ve seen—often, many years ago—and which would be a good fit for this blog. Right time period, a cast I like, music I like. Some of these (like Pyaasa, Mughal-e-Azam or Kaagaz ke Phool) have been analyzed and reviewed so often and by so many stalwarts infinitely more knowledgeable than me that I feel a certain trepidation approaching them. Others are a little less in the ‘cult classic’ range, but good films nevertheless.

Like Seema. I remembered this film a few weeks back when I reviewed Naunihaal (also starring Balraj Sahni). At the end of that post, I’d inserted a very striking photo I’d found, of a young Balraj Sahni standing in front of a portrait of Pandit Nehru. Both on my blog and elsewhere on social media, some people remarked upon that photo: how young and handsome Balraj Sahni was looking in it. And I mentioned Seema, as an example of a film where Balraj Sahni appears as the hero. A hero of a different style than the type he played in Black Cat, but a hero nevertheless.

END_OF_DOCUMENT_TOKEN_TO_BE_REPLACED

In one pivotal scene in Jis Desh Mein Ganga Behti Hai, Kammo (Padmini), the daughter of a dacoit chief tells her naïve beloved that they, the dacoits, are not to be scorned or derided, because they wield guns to make things equal between the rich and the poor. They take from the rich and give to the poor, because the poor have always been preyed upon by the rich.

“Kammoji, tum log chochilist ho?” asks Raju (Raj Kapoor), wide-eyed. Because chochilists, as he informs Kammo, also work to make things ‘barobar’ between the rich and the poor. And when he is reassured that yes, that is the philosophy of the dacoits, Raju decides there and then that he will no longer think of dacoits as evil people. 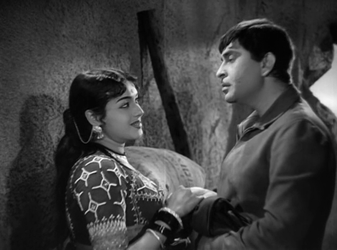