Today is the birth centenary of one of Hindi cinema’s greatest lyricists, the very prolific and versatile Hasrat Jaipuri. Born in Jaipur on April 15, 1922, ‘Hasrat’ was named Iqbal Hussain, and took to writing poetry fairly early in life. In 1940, not even 20 years old, Hasrat moved to Bombay, where, though he attended mushairas and wrote (and recited) a good deal of verse, he was also obliged to take up a job as bus conductor. This job helped him make ends meet for the next 8 years, when Hasrat had the good fortune to be noticed by none other than Prithviraj Kapoor at a mushaira. Kapoor was so impressed by the young poet, he recommended Hasrat to his son Raj, who was then in the midst of planning Barsaat (1949). Hasrat was taken on to write songs for the film, and that was the start of a very long association with RK Films—Hasrat wrote lyrics for all of Raj Kapoor’s films for the next two decades and more, invariably alongside fellow lyricist Shailendra.

END_OF_DOCUMENT_TOKEN_TO_BE_REPLACED

So, to rectify that and to let people post links to all their favourite songs about people selling things, this post. It features all those onscreen vendors of everything from flowers to jewellery to cosmetics to—well, whatever they feel called upon to draw attention to. 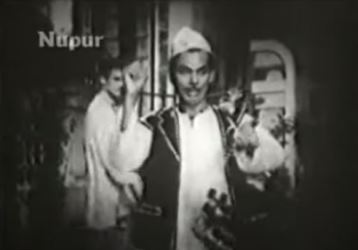 END_OF_DOCUMENT_TOKEN_TO_BE_REPLACED

When I created a list of my favourite car songs, blog reader Ragni requested a list: of songs that feature women playing a piano. I riffled mentally through the film songs of the 50s and 60s, and quickly responded: there would be just too many; how could I choose just ten? Another reader, Chris, came up with a suggestion: songs only from black-and-white films.

When I actually got down to compiling this list, however, I realized how impetuous I’d been. A closer look at most of the piano songs that sprang to mind, and I discovered that even if it’s a woman singing (as in Tu jahaan-jahaan chalega or Mujhe tum mil gaye humdum), it’s a man sitting at the piano. Songs where a woman is the one actually playing the piano are, when I came to think of it, relatively rare. I had to, perforce, expand the scope to colour films too. 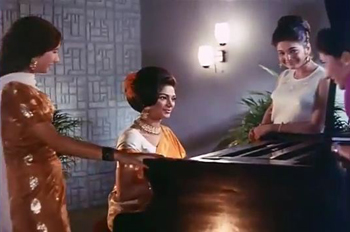 END_OF_DOCUMENT_TOKEN_TO_BE_REPLACED

When Shakila’s niece Tasneem Khan graciously agreed to write a guest post to mark Shakila’s birthday yesterday, I decided I ought to show my personal appreciation for Shakila by making a double bill of it—with ten of my favourite Shakila songs. Shakila, whether she was acting the vamp (in films like Aar Paar) or the heroine, had some wonderful songs picturised on her: romantic songs, funny songs, cheeky songs, melancholic songs. Car songs, train songs. Even songs in praise of Shakila’s loveliness. Plenty to choose from.

For this post, though, I’ve stuck to songs in which Shakila has actually lip-synched, irrespective of whether the song in question is a duet or a solo. That’s why you won’t find the very popular Leke pehla-pehla pyaar here, or even the hauntingly lovely Sau baar janam lenge.